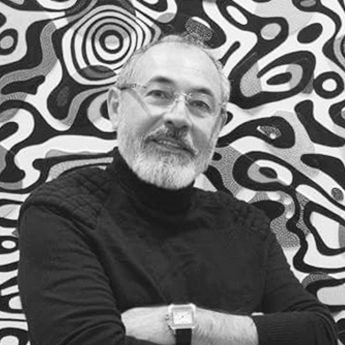 Armando Garcia Luna (A. Garlun) born in Monterrey, Mexico when the country was in full cultural and intellectual growth, passed the modern age and the influence of the European Avant–garde movement in Mexico. Aware of it, and nourished from the current pictorial and scientific knowledge, he advanced in several professional and vocational fields.

His talent and creativity, and I would dare to say passion in the arts field, has been the engine in the search of the beauty and understanding of the human universe. He initiated his studies in the Plastics Arts at the end of the 60’s incurring in different fields as painting, stage sets, fashion design in theatre and TV, becoming artistic director of soap operas for one of the most important television companies in Mexico.

Garlun’s scientific research and spiritual preparation has taken him to investigate, to risk and win; imagine, create and materialize; research and find and introduce us with a sequence, going from the absent of color through all color tones, to go as far as the pure blend of all of them.

Shape, color, approach, representation, light, shadow.   His pictures challenge the spectator, so his eyes can find what emerges from the white, complement emotion, feeling; to merge one glimpse into one look. Garlun presents his art to look at and through it. Takes from the raw material, which he knows microscopically, what it wants to transmit and achieves it through its form from its own materiality, and presents it to us in, such a way, immersing us in a world free of rules but full of colors and expressions. Millimetric precision in the use of elements, juxtaposition in its points (but not for pointillism), its lines, the use of sheets almost imperceptible to the eyesight, builds and immerses us to the crystalline world of his reality. Relief building forms, forms creating tales, tales telling stories, stories of the daily life, from his and ours, including passion, strength, will, which could be chaos or could end in peace.”